Declarations by health officials and vaccine makers that deaths and injuries following COVID vaccinations are unrelated coincidences are becoming a pattern. They’re also depriving people of the information they need to make informed decisions.

By Robert F. Kennedy, Jr.
The official handling last week of the deaths of two Danes and a Miami doctor following their COVID jabs highlights the gaping holes in the government’s surveillance system for detecting post-marketing vaccine reactions.

These incidents suggest that health officials will be unlikely to give the public authentic risk profiles for the emergency use COVID vaccines.

Accurate risk profiles allow regulators to determine if a medical intervention is causing more harm than good and consumers to make rational choices about their own use of a product.

Regulators usually develop risk assessments during preclinical trials by comparing health outcomes in individuals receiving the intervention against a placebo group. Such studies must be large enough to detect rare injuries and of sufficient duration to reveal ailments with long diagnosis horizons.

The existence of the placebo group makes it difficult to conceal or misattribute injuries. Conversely, the absence of a placebo group in post-vaccination surveillance systems makes it easy for self-interested pharmaceutical and regulatory officials to undercount injuries by attributing them to coincidence.

Coincidence is turning out to be quite lethal to COVID vaccine recipients.

Shortly after reporting the Danish deaths and prior to any autopsies, Tanja Eriksen, acting head of Denmark’s Pharmacovigilance Unit, told the Danish newspaper, EkstaBladet, that the Danish Medicines Agency had determined that coincidence probably killed the two Danish citizens whose deaths followed their vaccinations.

One of the deaths was a citizen who had "severe lung disease.” The existence of the comorbidity suggested that the death was therefore coincidental. The second citizen received the vaccine at a "very old age,” and therefore also expired from coincidence.

"When vaccinated in fragile groups, one would expect there to be deaths,” explained Eriksen, using logic seldom applied by health officials to deaths from the COVID-19 virus. "This will happen regardless of whether they are vaccinated or not.”

These simple declarations — that deaths and injuries following vaccination are unrelated coincidences — are becoming a pattern.

On Dec. 20, 2020, World Today News reported the death of an 85-year-old man in Kalmar, Sweden, one day after he received the vaccine. Dr. Mattias Alvunger of the Kalmar Hospital dismissed concerns about the death being related to the vaccine, calling the fact that it was reported to the Swedish Medical Products Agency as "routine.”

On January 1, Sonia Acevedo, a 41-year-old Portugese nurse and mother of two, died two days after receiving the Pfizer/BioNtech vaccine. Her father told the Daily Mail that she never drank alcohol and was in perfect health. Nevertheless, Portugal’s Health Authority dismissed her death as a sad coincidence.

Israel also reported two deaths from the coincidence pandemic: one in a 75-year-old man in Beit She’an, and the other an 88-year-old man. Both died two hours after vaccination. Israeli health officials warned the public not to attribute the deaths to the vaccine.

An army of experts from around the world, involved in the vaccine program, consulted in doomed efforts to restore Dr. Michael’s platelet count. The inevitable brain hemorrhage killed him two weeks later. Michael’s wife said that her husband’s death was "100% linked to the vaccine. She added that he was physically healthy, exercised often, rarely drank alcohol, never smoked cigarettes and had no known comorbidities.

Nevertheless, Pfizer dismissed Michael’s injuries as another sad coincidence: "We do not believe at this time that there is any direct connection to the vaccine.” Pfizer pointed out that ITP is also caused by excess drinking and reasoned that "there have been no recorded safety signals identified in trials from vaccinations so far.”

On Tuesday, the New York Times quoted Dr. Jerry Spivak, a blood disorder expert at Johns Hopkins University, saying "I think it’s a medical certainty that the vaccine was related.”

But Pfizer/BioNtech would not have been likely to see the thrombocytopenia signals in its brief, under-enrolled clinical trials. Thrombocytopenia occurs in 1 in approximately every 25,000-40,000 doses of the MMR vaccine. It is also a similarly rare, but persistently reported side effect of hepatitis A, TB, HPV, chickenpox, DTaP, polio and HiB vaccines.

An injury that occurs at that frequency would not likely be seen in Pfizer/BioNtech’s Phase II clinical trial because only 22,000 people received the vaccine. However, an injury of this severity occurring once in every 25,000 shots could debilitate or kill 12,000 of the 300 million Americans to whom the company hopes to give the jab.

The public can expect to see more of this strategic chicanery: When a healthy 32-year-old Mexican doctor was hospitalized with encephalitis — inflammation of his brain and spinal cord —  after receiving the Pfizer/BioNtech vaccine, Mexican doctors dismissed the injury as unrelated to the vaccination, reasoning that the condition had not been detected in Pfizer/ BioNtech’s clinical trials.

This week an Auburn, New York nursing home reported, without any apparent irony, that 32 of 193 residents have died since the facility began administering the Pfizer vaccine on Dec. 21. The company claims that its clients are dying of COVID-19 infections, not the vaccine.

Among Dr. Michael’s many grateful patients was Tessa Levy, who had a scheduled appointment with him for the Tuesday after his death on Jan. 3. Michaels delivered all four of Tessa’s children, saving one of them with an ingenious split-second diagnosis of a rare heart condition that would have otherwise killed the boy.

Tessa is the daughter of my close friend, the famous Beverly Hills surgeon, Dr. George Boris. "He was a healthy, strong, vigorous guy,” Tessa told me about Michaels. "He never showed any health problems.”

On New Year’s Eve, Dr. Boris’s brother-in-law, Murray Brazner, also died suddenly, one week after receiving the Pfizer vaccine. Neither the vaccine company nor any health agency took notice of his sudden unexpected death. "No autopsy was performed, and his death isn’t recorded as a vaccine injury. It makes you wonder,” Dr. Boris told me.

Mr. Brazner’s death illustrates an even graver problem: Many injuries may be escaping notice by the surveillance system and the media. Unreported stories similar to Dr. Brazner’s tragedy are already common complaints on social media.

On Jan. 2, Janice Hisle lamented on Facebook that her friend’s mom, an Ohio woman, died after receiving the vaccine. According to Hisle, the woman developed a high fever hours after the jab and died a "couple days” later. "I am so angry for my friend,” she commented, "who is crying because relatives were not allowed to see her before she was vaccinated. They thought the vaccine would ‘open the door.’”

We could find no mention of the Ohio woman’s death in media records or official COVID-vaccine death tallies.

One might assume that if deaths following COVID-19 vaccine can be so easily dismissed or ignored, lesser injuries will also escape notice.

The routine of reflexively dismissing suspicious deaths and injuries as unrelated to vaccination not only calls into doubt the official data tallies on vaccine injuries, it also contrasts markedly with the habit among public health officials of authoritatively attributing every death to COVID-19 so long as the deceased tested positive for COVID within 60 days of death using a PCR test notorious for producing false positives.

Regulatory agencies count every death as a COVID death, so long as the deceased tested positive for COVID within 60 days of death — no matter that he may have died in a motorcycle crash.

In September, the Centers for Disease Control and Prevention (CDC) admitted that 94% of individuals whose deaths the CDC officially attributed to COVID had other illnesses that may have actually killed them. The average deceased had 2.8 comorbidities. Yet in CDC’s official tabulations, CDC always presumes that COVID-19 did the killing.

But as we see from the examples above, when it comes to COVID vaccine injuries, the opposite presumption governs: the comorbidity is always the cause of death — even when, as with Dr. Michaels, there are no known comorbidities.

Pfizer touts a 95% efficacy rate in its clinical trials, but this is a meaningless measure of "relative efficacy” based on a tiny cohort of 94 people in the placebo group who got mild cases of COVID during the clinical trials.

The "absolute,” or "actual,” efficacy of the vaccine during clinical trials was 0.88%. According to the British Medical Journal, this means that health authorities must administer 155 vaccines to avert a single case of mild COVID.

The true risk of vaccine injury will continue to be obscured by the habit among public health officials of routinely dismissing reported injuries as unrelated to vaccination.

And so what do we really know about the true risk of COVID-19 vaccines?

Public health officials and industry spokespeople like to say that the risks of serious injury from vaccination are "one in one million.. However, in the first week of distribution, Americans took 200,000 COVID vaccines and reported 5,000 "serious” (meaning missed workdays or medical intervention required) injuries.

This is an injury rate of 1 in every 40 jabs. This means that the 150 shots necessary to avert one mild case of COVID will cause serious injury to at least three people.

We don’t know the true risk of death from the vaccine since regulators have rendered virtually every death invisible by attributing them all to coincidence.

The 1-in-40 risk of "serious injury” from Pfizer’s COVID vaccine is consistent with what we know about other vaccines.

For many years, the U.S. Department of Health and Human Services (HHS) has maintained a post-licensing surveillance system known as the Vaccine Adverse Event Reporting System (VAERS). Even government insiders like Surgeon General Dr. David Kessler acknowledged that VAERS is an abysmal failure.

Nevertheless, it is only by clinging to this "designed to fail” system that regulators and industry have maintained their pretense that current vaccine risk profiles are acceptable.

A 2010 study funded by HHS concluded that VAERS captured "fewer than 1% of injuries.” In other words, the actual injury rates from mandated vaccines are more than 100x what HHS has been telling the public!

Holocaust survivor Vera Sharav of the Alliance for Human Research Protection has observed that, "Everyone who gets any of these vaccines is participating in a vast medical experiment.”

Health officials generally concur that the granting of "emergency use authorization” to the rollout of experimental vaccine technologies with only a few weeks of safety testing, two years before the scheduled completion of Phase 2 testing, is a great human experiment, involving millions of subjects.

But researchers are unlikely to see all of the safety signals if a badly designed surveillance system allows local health officials and company employees the discretion to dismiss any serious injury as unrelated. 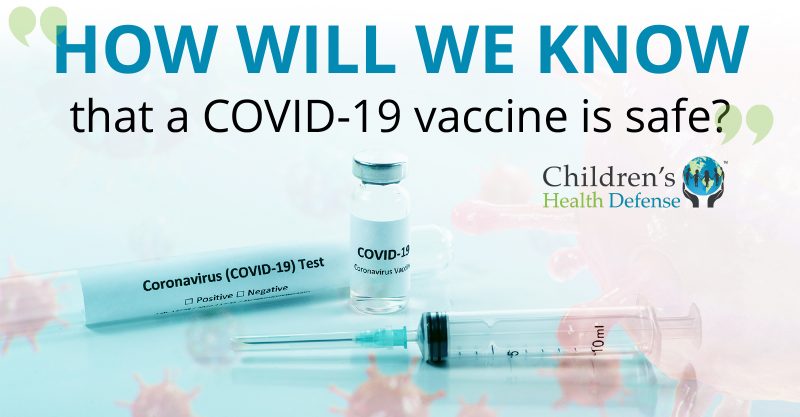 How Will We Know That a COVID-19 Vaccine is Safe?

Children’s Health Defense has created a video of Dr. Liz Mumper’s presentation titled "How Will We Know That a COVID-19 Vaccine is Safe?” This presentation is the result of a collaborative effort between Dr. Mumper and the team of doctors, scientists, and researchers affiliated with CHD.